Have you heard about a tiny Greek island called Icaria? Probably not, but you definitely need to learn more about it. This is one of not many places in the world where almost one-third of the population is made of nonagenarians, that is, people older than 90 years. Icaria, same as many other Greek islands has a very long life expectancy. Actually, the same goes for entire Greece, as well as all the other countries in the Mediterranean region. So here we are with best Olive Oil brands & their products.

So, what is the reason why people from this part of the world live so long? According to scientists from Harvard, it’s all about their diet. The Mediterranean diet is considered to be the most balanced traditional diet regimen in the world. It focuses on fish, cheese, fruits and vegetables, whole-grans, and, of course, olive oil.

Speaking of olive oil, Greeks are the number one consumers of olive oil per capita, with an average Greek consuming more than 24 liters of extra virgin olive oil annually. The same goes for the people living in other Mediterranean countries as well, e.g. Spain, Italy, Tunisia, and so on.

If you want to lose weight and improve your overall health, switching to a Mediterranean-style diet would definitely be a smart choice. And the fact that you can find most of the foods you need in your local shop means that you should definitely give it a try. We say “all” but the fact is that olive oil is an export item, which you can’t find in every single market. And even if you do, it’s probably not premium quality. To ensure you get all the health benefits, you need to look for extra virgin cold-pressed olive oil!

Now that we’re on the subject of health benefits of olive oil, let’s discuss each of them in more detail!

The list of benefits of olive oil is really huge, which is why we will focus only on the most important ones. So, let’s start!

Helps with getting a better tan – You can use olive oil as a skin lotion in combination with a sunscreen. Contrary to what you might read on some sites, olive oil does not have an SPF (sun protection factor), which is why you will have to use it in combination with a product that does. And the reason why olive oil is great for getting a fantastic tan is not only that it feeds your skin cells with all they need; it’s also because it will act as a sort of magnifier, enhancing the power of sunlight. This way, you will get a better tan in less time.

Using Olive Oil in the Kitchen

In Europe, North Africa, and the Middle East, olive oil is consumed on a regular basis. In other parts of the world, not so much. One of the reasons is that the best place to grow olive trees in the Mediterranean region, meaning that people from other parts of the planet can’t get ahold of it that easily.

Another reason why not everyone on Earth is using olive oil is that it can be pretty expensive. Generally speaking, it costs several times more than other types of oils used for cooking, e.g. sunflower oil. And the final reason is that not everyone likes its taste.

If you’re one of the people who hate the taste of it, it’s because you’ve been using it wrong. You’ve probably been doing something wrong in the kitchen, thinking that olive oil is the same as any other kind of cooking oils. But, it’s not, olive oil has a low smoke point. This means that you should not use it for frying. Instead, you better use it in sauces, marinades, salad dressings, stews, soups, and so on.

Of course, the taste of olive oil also depends on its quality. And that’s one more reason why you should stick with the best olive oil brands. Their products taste better than others, not to mention that they’re tested for quality and that they’re usually much richer in nutrients. So, which brands should you focus on? That’s exactly what the next part of the article is all about!

If you want to buy the best olive oil, our advice is to do it via Amazon. This way, you will be able to order it directly from the manufacturer, which can be located in Europe. You will save yourself some money, as well as make sure you get the real deal!

So, which olive oil products should you start buying? Here are our top 5 picks!

You can leave everything to Amazon if you want to buy a quality product at a very affordable price. The olive oil in question is made from olives grown in Greece, Spain, and Italy. It’s bottled in Italy and shipped all over the world.

It comes in a simple plastic bottle, which might make you think it’s not too extravagant. But, believe us, this is a top-quality product. And the fact that it doesn’t come in fancy packaging only makes it more affordable. 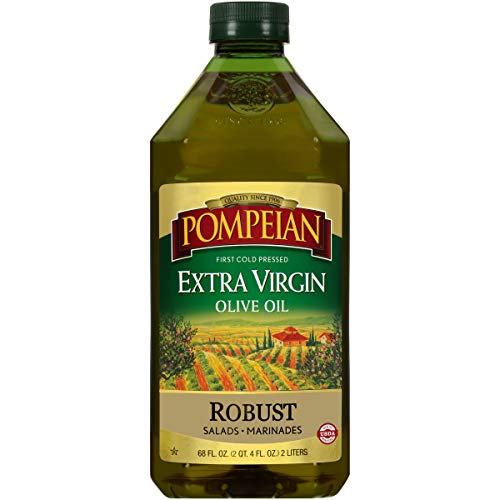 Founded in Baltimore over a century ago, Pompeian is America’s biggest and oldest importer of olive oil. And the brand is determined to keep up with its reputation and even improve it. And that’s only possible by selling the best possible olive oil.

Buying Pompeian Robust Extra Virgin Olive Oil means getting 100% natural non-GMO oil that also tastes very nice. Its taste is described as robust and pungent by the seller, who also recommends using it for marinades and salad dressings. The thing is that the acidity of this oil is really low. It’s less than 0.5% and that makes it possibly the best tasting olive oil on today’s market. 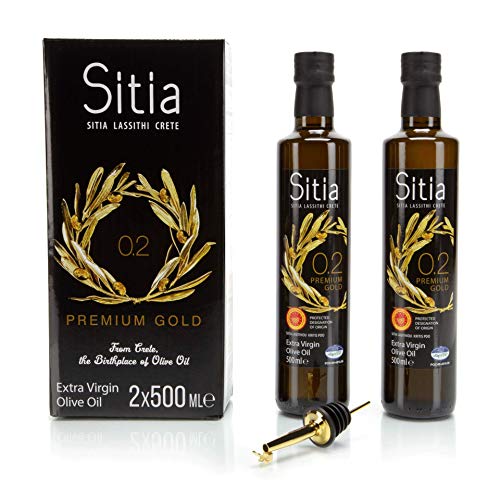 The acidity of this oil is under 0.25% which is not only healthy but also makes it very tasty. Actually, this olive oil has a really special taste and the reason for that is the early harvest. The olives used for this oil are picked early and cold-pressed.

This option is not a very budget friendly one, at least not when compared to the two products we’ve reviewed above. Still, there’s a reason why this olive oil is slightly more expensive. It’s made of a special type of olives called Koroneiki, which are grown on the Greek island of Crete, which is one of the southernmost islands in this country. The oil is made and bottled in Greece, before being shipped to all over the world.

Another reason why its a-bit-higher price should not surprise you is that the oil comes in glass bottles, meant to ensure the flavor and aroma of the oil does not alter during transport. 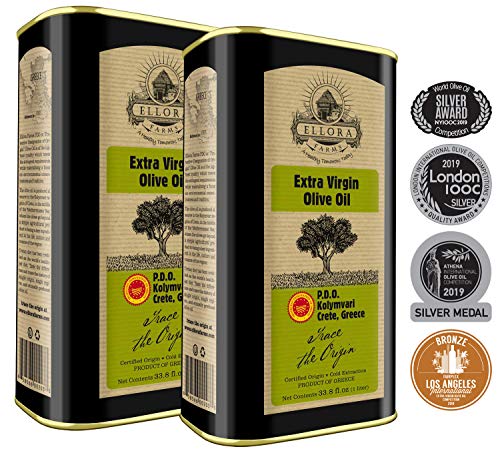 This oil is made of the same type of olives from the same region as the oil we reviewed previously. The olives in question are Koroneiki olives, grown in Crete, an island famous for best Greek olive oil. The oil was extracted through the method of cold-pressing, which ensures all the nutrients, as well as flavors, will not get lost.

The oil comes in a pretty luxurious packaging, which makes it ideal for gifts. It also has something other similar products don’t have – Ellora Farms Extra Virgin Olive Oil is a fully traceable product. What this means is that you will get a special code inside the package, which you can use to find more info about the bottle on the official site of Ellora Farms, which is www.ellorafarms.com. 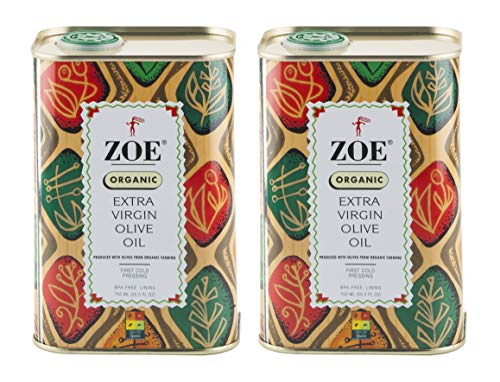 Zoe Extra Virgin Olive Oil is made in Spain, in a region called Castilla-La Mancha. Spain is the world’s largest manufacturer of olive oil, the main reason being that the climate is ideal for growing olive trees. Another reason is that the olive oil made in Spain is famous for its wonderful buttery taste, which is why it’s often used as the oil for cooking at lower temperatures.

If you’re looking for the best olive oil for cooking, this might be it. It’s tasty and comes in tin cans, which are easy to open and use. They’re also great because they will preserve the smell and taste of the oil for a long time.

A thing about olive oil is that depending on where the olives come from, the taste can differ significantly. You may fall in love with the aroma of Spanish olive oil, while not be impressed with oil made in Crete or some other Greek island. Our advice, however, is not to get stuck with a single type of olive oil. Instead, we say experiment!

Our suggestion is to try out as many different olive oil products as possible. And this won’t be too hard, especially if you decide to make this oil an important part of your everyday diet. This way, you’ll get in a need for a new bottle every couple of weeks. So, rather than buying the same as before, our tip is to pick another one.

We’ve already given you our suggestions, but feel free to experiment on your own. You can’t get much wrong here. After all, olive oil is made of one ingredient only. That said, the health benefits you get from different types of olive oil are more or less the same.

But, there’s one thing you need to be cautious about – there are many fake products out there. By “fake”, we mean products that don’t contain extra virgin olive oil or use a combination of various plant-based oils. This is why our advice is to stick to trusted brands, such as those you’ve seen in our reviews.

We have even reviewed more products from olive oil such as – Olive Oil Soaps, Olive Oil Shampoo and Olive Oil For Hair

We are David and Anna – a couple who loves living a healthy lifestyle. Our goal is to help people choose the right products to get the best results. We can help because David has a master's degree in medicine, and Anna is a dietist.

We are David and Anna – a couple who loves living a healthy lifestyle. Our goal is to help people choose the right products to get the best results.